It’s hard to believe that, a year ago today, Rachel Held Evans died. Because she was so young, because her children were so young, because her illness seemingly came out of nowhere and developed so quickly, and because her life and her work meant so much to so many, the news of her death landed like a punch to the gut for thousands of people, myself very much included.

Rachel was one of the most important Christian leaders and writers of our generation. She was a profoundly influential and effective advocate for LGBTQ people in the church. She was a beloved daughter, sister, wife, and mother. On a personal level, she was a treasured friend and cheerleader. (And as the above picture captures, her cheerleading inspired reciprocity. We were both speaking in Nashville a few days apart, so before her event, I put together this banner with my hotel printer.) 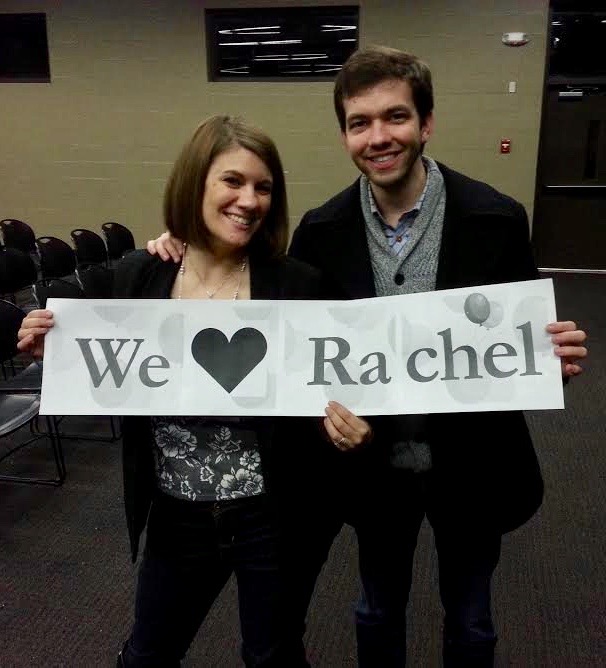 I have missed her on so many occasions over the past year, in ways big and small. There have been so many times I’ve stopped and lamented the void that her death created and the ways her absence has impoverished the church and the world. But for all that has been lost, I have just as many times paused and celebrated the enduring impact of her example, her courage, and her faith. When it comes to uncomfortable but necessary conversations in the church, Rachel led the way in pushing the toothpaste out of the tube—and it will not be going back in.

As I’ve reflected on Rachel’s legacy as the one-year mark since her death has approached, one of the phrases that has most stuck with me has been the name of the conference she co-founded and led for several years: “Why Christian?”

Rachel was insistent in asking the question: Why should science be a threat to faith? Why should women not be allowed to be in church leadership? Why should same-sex relationships be condemned? Why are so many white evangelicals so vocal about some issues but so quiet about racial injustice, sexual assault, sexism, and the dignity of undocumented immigrants? She wasn’t afraid to ruffle feathers with her questions, nor was she afraid of the consequences of challenging powerful leaders in the church when she thought it was necessary to do so.

But Rachel was not a provocateur, challenging for the sake of challenging. What made her special was that her questions, her invitations, and her critiques were so clearly rooted in her love for her faith, her love for the Bible, and her love for the family of God. She insisted on asking questions because she insisted on conforming her life to the life of Jesus, even when doing so could solicit the condemnation of religious leaders and banishment to the proverbial wilderness.

And as the name “Why Christian?” succinctly captures, her goal in asking questions wasn’t to tear down, to leave us only with doubts and no longer with any beliefs. No, at the end of the day, she welcomed doubt in the service of strengthening a faith built on the rock rather than on the sand. She didn’t just ask “why,” she also then declared with hard-won credibility, “Christian.” “I am a Christian,” she said, “because the story of Jesus is still the story I’m willing to risk being wrong about.”

We have lost so much in her absence, and today is a day to remember and grieve that loss. But it is also a day to remember how much we gained from her presence, and how enduring is the imprint of her fearless, faithful life. We need more Christians like Rachel, who can doubt and believe, challenge and love, be both a beacon and a bridge.

As the world rages around us like a storm at sea, with daily opportunities for despair and disillusionment, may we be reminded of her example: that even though the waves may be breaking over the boat, we can confront them—and all of the challenging questions they bring—head-on while holding fast to the story and person of Jesus as the anchor at the center of it all.

Rest in peace, Rachel. You are so loved, and so missed.